June 16th, 2018: On a blustery night in Hollywood, female filmmakers gathered together to celebrate and tell their stories on the beautiful big screen of The Egyptian Theater. The ten short films featured at Etheria Film Night boasted a wide variety of horror, dark comedy, psychosexual drama, and sci-fi thriller themes, each with their own unique style and allure and all made by women.

The evening also paid tribute to director Rachel Talalay and her contributions to the world of women in film, noting in particular her cult classic TANK GIRL (1995) and its major influence on young women that has endured from the mid 1990’s through to today. The Inspiration Award was presented by TANK GIRL actor Lori Petty to Talalay. Petty’s moving speech, along with a well-wishing video from cult film director and “filth elder” John Waters gave a poignant look at a woman who began her career as a production assistant and worked her way up to directing, all the while never compromising her values or vision. Talalay’s acceptance speech continued to inspire and move the audience, ending with the veritable battlecry, “As a post-punk feminist warrior I can’t stop fighting and neither can you.” The films which followed were all winners in one way or another. Every story told that evening was done so in a creative and stylish way that gripped the audience with thrills, laughter, and more.

LABORATORY CONDITIONS (Dir. Jocelyn Stamat and winner of both the Audience and Jury Awards) featuring actors Marissa Tomei and Minnie Driver takes the viewer on an eerie adventure as what begins as a lost patient becomes an experiment in existentialism and a question of the darkness of the great beyond. Without giving away too much, I’ll say this: one of the best elements to this short was the use of music and sound to build suspense. Further, in a refreshing turning of the tables, it was amusing to watch a classic “Nerdy Guy” trope being utilized simply to further the plot without overshadowing the female leads whose acting truly stole the show.

LADY M (Dir. Tammy Smith) gives new meaning to the idiom “age before beauty”. This film tells the story of an older woman whom to many is seen as being ostensibly past her “prime” and her attempt to try out for the lead role in what has been dubbed by theatre folk Shakespeare’s “Scottish Play” (aka Macbeth). Having been surpassed by a younger actress for the prime role, our protagonist, an actual witch, causes a cavalcade of confusing and hilarious issues on opening night. While the story may have seemed a bit silly, it was certainly an enjoyable watch. Further, the cinematography in LADY M is excellent. The scenes are framed beautifully, particularly the scene in which the directors of the play are giving their rejection notes.

BRIDE OF FRANKIE (Dir. Devi Snively) was, in my humble opinion, the standout of the bunch. This shlocky, B-movie inspired, humorous horror film was a perfect send up of the Mary Shelley classic FRANKENSTEIN. The stylistic choice of shooting in black and white gave the film a YOUNG FRANKENSTEIN kind of feel, while being notably female driven in story and characterization. A young woman, Frankie, is the quintessential mad scientist trope, with a small twist. She is not driven by a thirst for power but rather that of love. Her desire to create a mate for the monstrous Monty – while avoiding being caught by her controlling and distant lover, Victor – is a perfectly adorable premise. In a bold subversion of heteronormative expectations, Frankie’s creation, ends up falling for Frankie and the pair ends the short dancing together sweetly. The cute comedic dialogue as well as the costumes are all a part of what makes this film so stunning. CRESWICK (Dir. Natalie James) is not your typical haunted house tale. The suspense is built throughout the story as to the otherworldly goings on inside the house through quick cuts and sustained shots of the main character staring off into the abyss. Choosing to slowly ramp up the viewer’s discomfort rather than frighten with predictable jump scenes, CRESWICK definitely keeps the viewer guessing until the very end. However, the disjointed storytelling and ultimately weak pay off make the film one of the less memorable of the ten.

SKIN DEEP (Dir. Elizabeth Serra) is a slice of dark comedy that can only accurately be described as a STEPFORD WIVES-esque cannibal catfight with a heavy influence of campy Kung Fu films thrown in for good measure. This badass Russ Meyer-like movie is quite funny and was a great way to help add some comedic relief in the midst of a great deal of terror. The 50’s costuming and unique color palette are eye catching and match the silly, pun-laden dialogue perfectly.

INSTINCT (Dir. Maria Ardilla) is a beautiful depiction of bloodletting as performance art (along the lines of Ron Athey’s style) with a hair-raising twist at the end. The female leads in this film have fantastic chemistry and the stylistic choices by director Ardilla create a gorgeous backdrop for some tense moments. The cold and clinical color palette of whites, blues, and grays that envelops the art gallery provides an excellent visual during the bloodletting performance scene wherein a thin line of deep red blood travels through a tube across the screen, punctuating the scene and bringing life into the otherwise seemingly dull atmosphere. This film is truly a must-see and the story is one that stands out as a unique and frightening premise.

OVUM (Dir. Cidney Hue) is a BLACK MIRROR-esque story told in the vein of the episode “Playtest”. It is beautifully shot and it is obvious that a great deal of thought and passion were present into the filmmaking process; however, the payoff falls a bit flat. Though this film is ultimately a dystopian critique of antiquated attitudes towards female reproductive rights, the story comes off as somewhat predictable and unoriginal overall.

THE DROP IN (Dir. Naledi Jackson) is KILL BILL for 2018. Featuring strong female leads and a pervasive unsettling vibe created expertly through the use of sound, lighting, and editing, this film is a strong piece that knows exactly what and how it wants the viewer to feel when watching. The viewing experience urges us to solve the mystery behind the story; however, by the end, we are left with many questions and truly wishing to see more. The acting is incredible and the fight choreography is just amazing. The editing in the penultimate scene truly inspires a chilling feeling. THE AGENCY (Dir. Macarena Montero) has a BLADE RUNNER meets BLACK MIRROR look and feel to it. In this story, a female dominated society is now in power and men have become, essentially, obsolete other than to be objectified and bought and sold as husbands through the service of agencies catering to the needs of women. The vintage style costuming paired with the modern makeup makes for an interesting commentary about the mixing of old and new world attitudes. The “Pretty Boy” trope present in the supporting actor makes for a unique twist. The story is interesting as it takes a critical look at the long-held attitudes of objectification towards women, suggesting a future in which the tables have turned.

C U LATER TUESDAY (Dir. Anca Vlasan) was a wonderful way to end the night. The story of a young woman who gets dumped and subsequently, accidentally joins a cult, was a fantastic palette cleanser and a high note on which to end the night. The editing in this film is superb. The quick cuts give it an almost cartoonish kind of feel and the silly dialogue and visuals had the audience rolling with laughter. One thing director Vlasan stressed when I interviewed her on the red carpet was that there would be real scenes of eating in the film and not just the stereotypical “Woman Laughing with Salad” imagery, a promise that was certainly fulfilled. Overall, Etheria Film night was a joy to attend and a kind of forum for women that I, for one, would definitely care to see more of. We need more women in film. We need to tell more of women’s stories. Sure, the next big budget, bank-breaking, blockbuster is always right around the corner, but the spirit of women within independent film is a spark that ideally should become a raging inferno. It’s long overdue for women to have a louder and larger voice in the world of film and events such as Etheria Film Night are a perfect way to fan the flames of greatness. 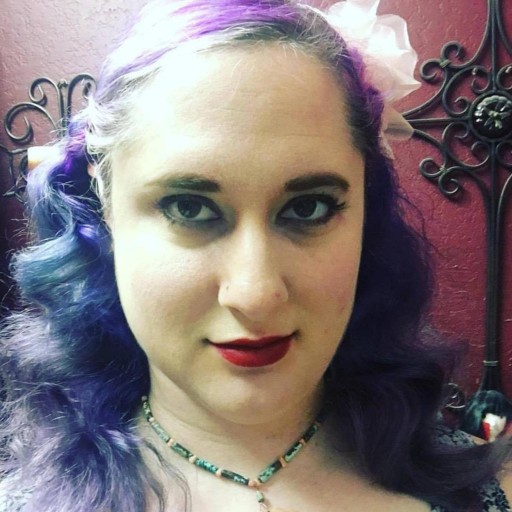 Deborah Kavis
Deb is a writer based in the Los Angeles area who has always had a taste for the strange and unusual things in life. She loves Twin Peaks, The Rocky Horror Picture Show, and The Cramps just to name a few. She can often be found picnicking in cemeteries or batcaving in the darkest corners of local goth clubs.