How much responsibility should creators of fictional horror bear? That’s the question posed by RANDOM ACTS OF VIOLENCE, while taking the viewer on a gripping and gruesome road trip. Continuing our interview that began here, filmmaker/actor Jay Baruchel here explores the creation and themes of his second feature directorial effort.

Recently released in Canada and debuting on Shudder this Thursday, August 20, RANDOM ACTS OF VIOLENCE is based on the graphic novel by Justin Gray and Jimmy Palmiotti, and stars Jesse Williams as comics creator Todd, who’s seeking inspiration for the wrap-up of his hit SLASHERMAN series. When he embarks on a promotional tour with his girlfriend Kathy (Jordana Brewster)–who’s working on a book about the real-life murderer who inspired SLASHERMAN–his publisher Ezra (Baruchel) and his assistant Aurora (Niamh Wilson), the group are shadowed by what appears to be that true maniac, back for another round of slaughter. Scripted by Baruchel and Jesse Chabot, RANDOM ACTS OF VIOLENCE (reviewed here) is a startling left turn into horror by Baruchel, previously known for appearing in comedies, including his directorial debut GOON: LAST OF THE ENFORCERS.

RANDOM ACTS’ cinematography by Karim Hussain (WE ARE STILL HERE, HOBO WITH A SHOTGUN) is pretty striking. Was there any attempt to echo the look of the comic, or did you two just want to do your own thing visually?

I believe that subconsciously, we knew we wanted the movie to be kind of arch color-wise, and that comes from comics. But it was more that Karim showed up, as he always does, with a storage container full of ideas. He came in right away and was like, “I have an instinct: I think it should be cyan and amber.” I said, “That’s really interesting,” because one of the colors I wanted in the thing was a sort of warm pink, the cumulative effect of a bunch of Christmas lights firing at once. If you look at the wall behind a Christmas tree, all of them make a sort of pink when they conspire together. So I said, “Well, pink and amber is a scale we can work with, and then green makes a lot of sense.” 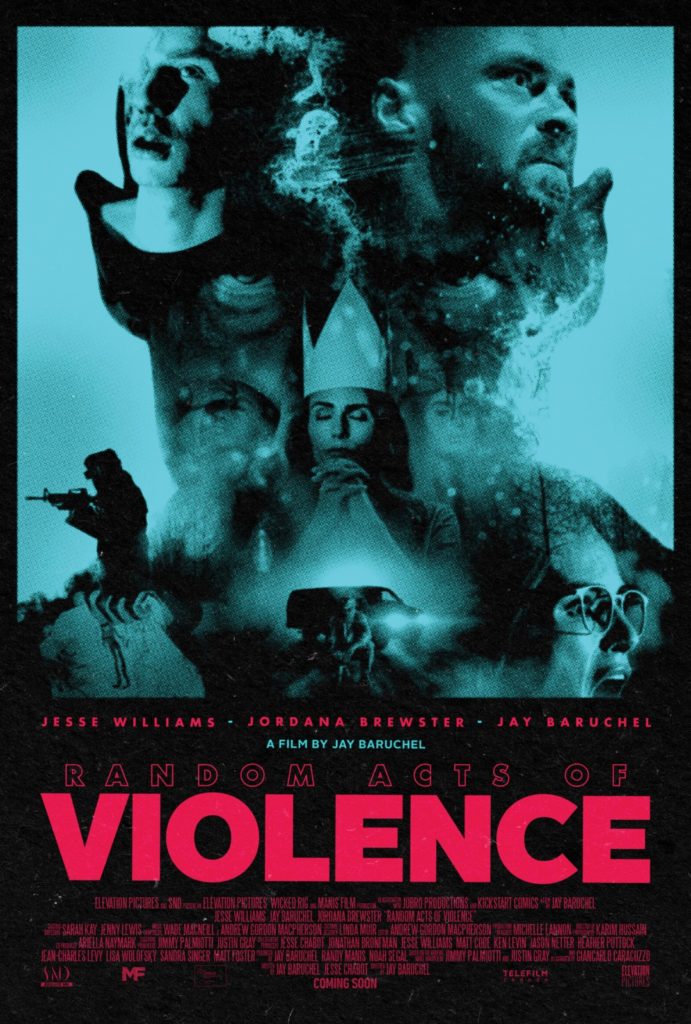 This is all to say that there are thematic reasons and tonal reasons for the aesthetics, though what you ideally want to happen happened–which is, we started experimenting with different concepts, and we found one that was very effective, and an aesthetic that seemed to make sense. It ended up being a way prettier film than we set out to make, though it definitely borrows something from the comic. That’s something that keeps coming up: People tell me it looks like a comic book, and I can’t say it’s unintentional, because clearly it’s in there somewhere, but we didn’t set out to light it like a comic; it just ended up being that.

Anyone who makes a movie that comments on media violence while being violent itself runs the risk of a certain kind of criticism, so how did you approach that side of RANDOM ACTS?

I wanted to ask a question rather than teach a lesson. I was in high school when Columbine happened, and I was, like anybody but especially a kid in art school, deeply offended by the kind of facile arguments that were being made. People saying DOOM and ANTICHRIST SUPERSTAR made kids shoot up a fuckin’ high school is utterly nonsensical. But I believe something that’s equally nonsensical is this concept that you have no responsibility for what you put into the world. I don’t think any one of us has carte blanche; we have the freedom to create, that’s fine, but once it’s out there, you own a piece of it, you can’t divorce yourself from it, and you need to understand that. That is, at the very least, an interesting push and pull.

In terms of making a violent film that talks about violence, we took great pains to take as much of, for lack of a better term, the fun out of our kills as we could. We wanted to make them as impactful as possible, but also, more than anything, we wanted them to be harsh, we wanted them to be difficult and we wanted them to be an answer to the kind of outlandish decapitations and arterial spray and the stuff that elicits big applause and high-fiving the guy next to you in the theater. We didn’t want any of that; we wanted it to be as close to verisimilitude as we could muster.

But the important thing for me is, I want people to ask questions of themselves when it’s over. I don’t want to condemn anything, except for avoidance of responsibility. That’s the biggest thing, and having your priorities out of whack. The best thing that could happen is people imbuing their viewings with just a bit more analysis–to trigger in people the same process that we all fall into quite easily at the grocery store, where we look at the back of a product to see what’s in it. I just know that I myself, as a movie fan and consumer of many different kinds of content, was often leaving analysis on the table. I noticed a process in myself that I wasn’t crazy about, and I wanted to unpack it, and that’s what’s in RANDOM ACTS OF VIOLENCE. I’m quick to say that this movie doesn’t say comic books make people kill people, but it does say that you influence people, and people should be mindful of the influence they have.

And also, what is the impact of growing up in a culture that contributes to the perception of women being a certain way? I look at the movies and music videos and stuff that I grew up watching and intaking, and was sometimes more involved with intellectually than others; sometimes it was just wallpaper. But I started wondering, what is the totality of that? What are the values that have eaten into me, as the media and culture have washed over me? This is all to say, I was trying to ask questions rather than necessarily condemn anybody for anything other than, as I said, a refusal to take responsibility.

Have you seen the movie with audiences, and how have they reacted to that side of it?

I’ve only seen it once in a theater, and that was a screening I put together for some friends and family. That was obviously a very friendly crowd [laughs], but it made significant waves in Austin at Fantastic Fest. It’s been interesting; the reactions have played out exactly as I wanted them to. I wanted people to fall in love with my film, and short of that, I want them to hate it, and question my right to make this movie. And that’s what happened; people who dig it, dig it in a big way, and the stuff they connect with is everything we’re talking about, the dialectic contained within it and the questions people were asking themselves, and the lack of solid footing for them to land on philosophically. They also respond to how scary and harsh it is, which is great; you don’t make a horror movie because you want not to be scary, right? But the opposite reactions have been, “I abhor this film!” and that’s exactly what I wanted too, man [laughs]! If I had somehow turned RANDOM ACTS OF VIOLENCE into the kind of movie you fall asleep to on Air Canada, I’d be heartbroken. There’d be no coming back from that.

Are you going to continue exploring the horror genre as a filmmaker?

I would absolutely love to! I’ve got a bunch of projects in varying degrees of development that I’ve been told expressly I have to keep to myself, because I have a big mouth and I tend to talk a lot! So I’ve been reined in after day one of junketing, but yeah, man; every movie’s a miracle, and I take nothing for granted. After GOON 2, I didn’t assume I’d ever get to make another one; I knew I wanted to, but I was like, this might be the only time I ever get to make a movie. So I’m still at that place, mentally. However, I want nothing more than to spend the rest of my life making horror movies and action movies, and I’m working very hard toward that end.