Below, we continue our conversation (which begins here) with Prano Bailey-Bond, director and co-writer (with Anthony Fletcher) of CENSOR. Now in select theaters and coming to VOD tomorrow from Magnet Releasing, it’s an exploration of the British “video nasties” scandal of the 1980s, but largely the story of one censor in that era whose own life becomes a horror story.

Niamh Algar (WRATH OF MAN) stars as Enid, whose job it is to determine which gory bits need to be cut from screen shockers before they can be passed for exhibition. One such movie, DON’T GO IN THE CHURCH by an elusive filmmaker named Frederick North, seems to directly recall a traumatic event from Enid’s life: the disappearance of her sister when they were both kids. Enid’s quest to learn what connection North’s cinema might have with her own history leads the audience into a gripping and surreal story of obsession and damaged psyches. (See our review here.) Bailey-Bond, who also discusses the movie in RUE MORGUE #200, here begins by discussing her collaborators…

How did you find the right actress to play Enid?

I saw quite a lot of actresses, actually, because when we were writing the character, there wasn’t a set age for Enid. We just knew she needed to be old enough to be a film censor, and young enough that her parents were alive and well. When my casting director, Nanw Rowlands, told me that Niamh Algar’s agent had been in touch and very interested in the project, I was like, “I know Niamh! I’ve met her before.” We were in the Screen Stars of Tomorrow during the same year, a Screen International program where they select a group of up-and-coming actors and filmmakers, and we got to go to fancy dinners and things like that together. Then I’d seen her in the TV series THE VIRTUES, and that was the first thing I had ever seen her in, and I was just like, there’s something very special about this actress.

But it was the usual route, really, in some ways: She came in and auditioned for the role. I knew I needed someone who was electric on screen, who we couldn’t look away from, who had that nuance where they could show thought on screen, because Enid is very repressed and coiled at the beginning of the film. She’s interpreting information in a very specific way, but not expressing i; there’s no best friend she tells what she’s thinking. And when Niamh came in, she was that person I couldn’t look away from. I was blown away by how she took the scenes and didn’t just make sense of everything on the page, but brought something extra to the work. I knew I’d found the person who could carry us through this film, because it’s such a big emotional arc for the character. 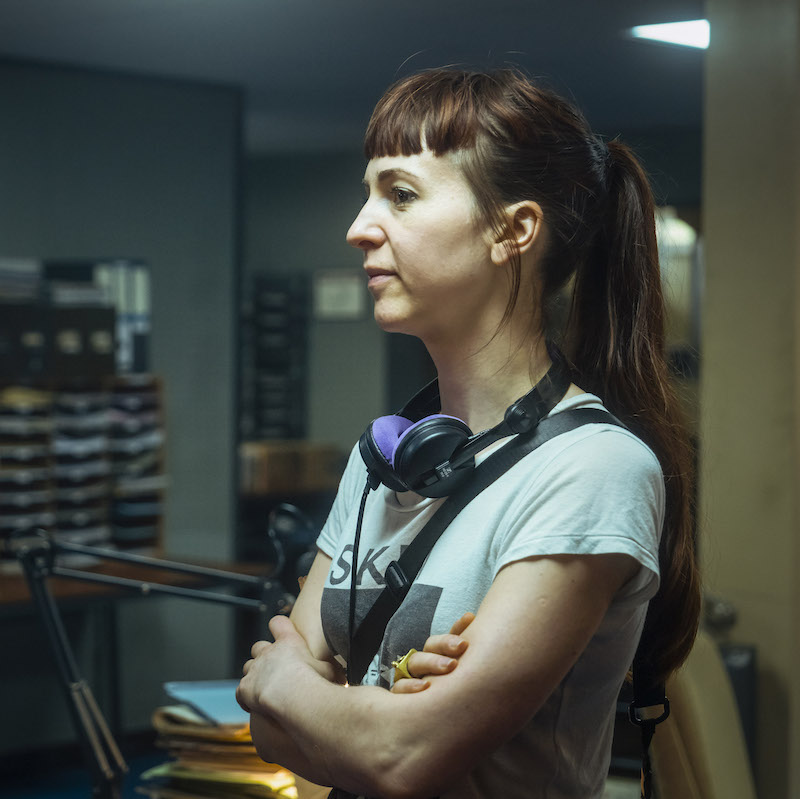 Tell us about your key creative team, and what they each brought to the movie.

I’ve actually worked with my DP, Annika Summerson, on the majority of my body of work. We have such a brilliant relationship, in terms of communication. Ultimately, you’re always looking for people you can really trust, and Annika is one of those people. Also, she has this incredible talent when it comes to lighting, and using it to express story and character, and how she can use the shadows. We’re both huge fans of color, so we both thought about how we’d use it to slowly weave us from the real world of the film into the video-nasty world. We also talked a lot about that with Paulina Rzeszowska, the production designer, and Saffron Cullane, the costume designer: how we could use color to have Enid break away from the censors’-office world and become part of the video-nasty world.

When Paulina came in with her ideas, I felt that she really understood the character, and would be able to channel that understanding into her design work. And then Saffron is also a longtime collaborator and a very good friend, and so talented and knowledgeable about fabric and design and shape. Also, the way she works with actors is so collaborative. The costume department and the makeup department are the people you’re going to be leaving your cast with; they’re going to meet and greet the actors in the morning, and spend time with them. And Saffron is an actors’ costume designer, basically; she and the cast developed the wardrobe so they felt like they were becoming the characters through the clothes.

I’ve also worked with Ruth Pease, our makeup artist, on quite a lot of my work, and she’s a massive horror fan. She probably knows more about video nasties than me, and loves all the gore and everything [laughs]. So she was brilliant not only when it came to the period look, but working on some of the stuff with Dan Martin, our makeup effects artist. I call Dan the godfather of effects here in the UK; he’s done most of Ben Wheatley’s films and others, including the recent film HOST, and is just brilliant. When you write something thinking, OK, I want to kill a character like this, and then you’ve got to figure out how you actually are going to do that, Dan is always the go-to guy.

Then on the postproduction side, we have Mark Towns, who is an amazing editor. He worked on SAINT MAUD recently, and THE RITUAL and THE SURVIVALIST, all amazing films, and he’s another massive horror fan. He has a whole room in his house that is basically wall-to-wall videos, Blu-rays and DVDs. When we met and talked about CENSOR, I was like, this is the person I want to be sitting in a room, putting this story together with, because he knows about this era, he can bring that knowledge to the film, and he’s also an amazing collaborator and works so hard. Tim Harrison, who did the sound design, is another longtime collaborator, and he actually got involved very early on, so I was talking to him about the project from way before shooting. He actually put together a lot of fake video-nasty soundtracks we could use. A lot of them are in the film; in the background, you’ll hear a film playing in another room. He came up with titles like BRAINSPLITTERS and RUN, RABBIT, RUN–all kinds of cool names.

Tim collaborated amazingly with Emilie Levienaise-Farrouch, who did the music. Emilie came on board during post, and when she sent her first piece of music in and we put it against the picture, I thought, this woman has just tuned into Enid’s trauma in a fascinating way. It brought us closer to the character, basically. I should also mention my producer, Helen Jones. She and Anthony Fletcher and I were a trio right from the start, trying to get the film off the ground and taking it through development for quite a few years. It’s Helen’s debut film as producer as well, and she did a terrific job of just pushing the project. It’s hard, isn’t it, getting a film off the ground, particularly for a bunch of first-timers. She worked incredibly hard.

Rzeszowska was also part of the SAINT MAUD team. Had you seen that film before or while you were working on yours?

I hadn’t, actually, no. It’s funny, because I only saw SAINT MAUD when it came out in the cinema in the UK at the end of last year. But I know Rose Glass, and we’d met up before she shot SAINT MAUD and I shot CENSOR, and talked about the process of making our first features. She told me that both Mark and Paulina were amazing to work with, so that helped.

Is your fictitious nasties director Frederick North based on any actual filmmakers?

When I was writing that character, I was definitely looking at interviews with horror directors from that period. He wasn’t based on anybody, but I was reading interviews with people like Dario Argento, and thinking about how this kind of dark mystique could be created around the idea of this filmmaker. I’m not sure if Adrian Schiller, who played Frederick North, was leaning into directors he’d worked with when he played the character!

Did you enjoy taking on a different style when you were shooting the nasties within the film?

Very much–I really enjoyed that. One of my favorites to shoot was ASUNDER, the one where we discover Alice Lee, because I had to tread the line of keeping it from becoming too hammy and pulling us away from Enid’s story. It couldn’t be a pastiche, but at the same time, I got to sit down and really analyze what it is that makes these films these films. It’s not just the look, it’s also the performances. For example, the blocking of the camera with the actors. I remember saying to one of them, “I’m going to ask you to do things that feel like they’re pushing against your instincts, but when you say, ‘Wait, let me see!’ don’t go to her. Deliver the line, and then go to her.’ ” Those little tiny details are what really land us in that period and in those films. And Annika completely nailed those scenes in terms of how she lit them.

Do you think those events from the ’80s can be related to Internet controversies today?

Yeah, we are in that now with social media, aren’t we? The way we’re blaming new technology. We can’t see the future yet, so we don’t know how this is all going to ultimately affect us. There are obviously algorithms and political power that you have with social media that make it a slightly more complicated conversation, I think. Perhaps in 30 years’ time, someone will make the social-media version of CENSOR, looking back at this decade and wondering if we were all being a little bit hysterical.

Has it been a relief to make and release a horror film at a time when the genre is not as censored as it was back then?

Yeah, but I think people were having a lot of fun upsetting people on purpose with these movies in the ’80s. It feels like there was a certain amount of joy coming from people who were making horror films, going out of their way to upset the conservative-minded opposition. And now, it’s much harder to upset people, isn’t it [laughs]? Luckily, I don’t get off on upsetting people, but I think having that freedom is important, and I appreciate it.