After five years in the works, CULT GIRLS, by Australian filmmaker Mark Bakaitis, finally hit the big screen for its world premiere at the current Fangoria x Monster Fest 2019 in Melbourne, Australia (see the trailer below). Powered by folk horror, melded with the supernatural and the well-publicized Australian story of real-life cult the Family (also the subject of a feature documentary and numerous print and TV news items), CULT GIRLS follows young Dalia (Saara Lamberg) as she sets out to reclaim her past as a member of a cult who, among other things, regularly dosed their dyed-blonde children with LSD. Along the way, Dalia discovers that her former captors/benefactors are deeply and historically involved with the occult and other, much more nefarious activities than she ever suspected. Characters she meets include cult leader Ragana (Jane Badler from V) and death metal prophet Moloch (Albert Goikhman). 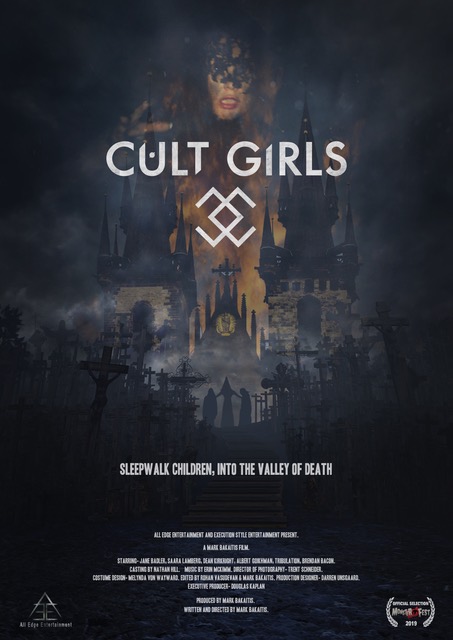 CULT GIRLS grew out of the opportunity for Bakaitis to shoot some footage of his ancestral home of Lithuania. Here, he learned of the local prevalence of folk horror in everyday life—and realized that he needed a screenplay to turn his atmospheric and distinctive footage into a feature. “We always knew that we could only shoot so much over there, and that we’d have to come back and build the script around it,” says Bakaitis on a gloomy winter’s morning in Melbourne. “It sort of held the screenplay back a little. I tried to work with Mia Kate Russell and a few other people but eventually realized that I would just have to do it. In the end, I was very happy to include the images we shot in Europe into the final film, structured with the voiceover of the black metal character.

“It took a long time to get the script going,” he continues, “and then getting the money in stages. It was such a tough process. In the end, I just wanted a nice sound mix and composition and grade. No local funding bodies came through, but due to having Jane Badler in the film, I got two U.S. executive producers to invest in the film and was able to finish it off in LA. This was an amazing and daunting experience. My sound mixer had worked on some incredible films like INDEPENDENCE DAY, DON’T BREATHE and EVIL DEAD, so I felt I was in pretty good hands with him.”

When it came to CULT GIRLS’ subject matter and mood, Bakaitis was influenced by the work of Jean Rollin and Jess Franco, and other pagan-centric films such as BLOOD ON SATAN’S CLAW, THE WICKER MAN, WITCHFINDER GENERAL and THE DEVILS. “My grandparents migrated to Australia from Lithuania,” he notes, “and it always seemed to be such a mystical place. My grandfather was a devout Christian, yet he would still have these statues of pagan devils around the house, which fascinated me.”

CULT GIRLS is making its way into the world in the midst of a folk-horror boom, and Bakaitis remarks, “During the period I made CULT GIRLS, it was interesting to see all these films emerge like THE WITCH and MIDSOMMAR. There seems to be a revival of ritualistic horror films that are more psychological than slasher. They make you think more intensely about what you’ve watched. For example, I couldn’t stop thinking about MARTYRS for a week after I first watched it. Even HERDITARY. You look back at that for a second time, and suddenly all the clues you didn’t see in the first place become so obvious. I was aiming for something like that with CULT GIRLS. We’ve got some deeper levels. If people do know a little bit about the occult, pagan things and black metal, then they might want to learn a little bit more.”

Bakaitis previously made NARCOSYS (starring Mia Kate Russell as a character called Matrix), a cyberpunk actioner set in 2018 that nabbed Best Film at the 2000 Melbourne Underground Film Festival and saw U.S. DVD release in 2003. CULT GIRLS already has an Australian distributor, Umbrella Entertainment, and is looking to spread the fear around the world in the coming year.