It’s never too late to celebrate the wide range of filmmaking showcased at the Fantasia International Film Festival, most particularly in its many short-film programs. Though each is specifically themed, the individual entries are always distinctive, taking many different approaches in tone, style and technical approach. This past summer, both the Born of Woman and Small Gauge Trauma lineups offered especially intriguing, consistently engrossing and sometimes quite frightening slices of horror, science fiction, fantasy and general weirdness.

In the celebration of female directors that is Born of Woman, it wasn’t surprising that several of the entries tackled topical themes. Fraught relationships between the sexes are explored in a couple of them, starting with Linnea Frye and Adam Pinney’s LILY’S MIRROR, in which a date goes violently wrong for Lily (Frye). She literally loses a hand, and a doctor (Mary Kraft) gives her a therapeutic mirror box that not only allows her to deal with phantom pain, but brings her into solidarity with past murder victims. This is conveyed via amusing visual effects, and the short overall treats a serious subject with just the right satirical tone. In Tipper Newton’s WILD CARD, Daniel (Billy Flynn) meets Toni (Newton) via a video dating service, and their first awkward get-together leads them back to her place, where the mystery around Toni deepens. A sort of ’80s-flashback noir, this one keeps us hooked and guessing, and wanting to know more in the right way when it’s over. 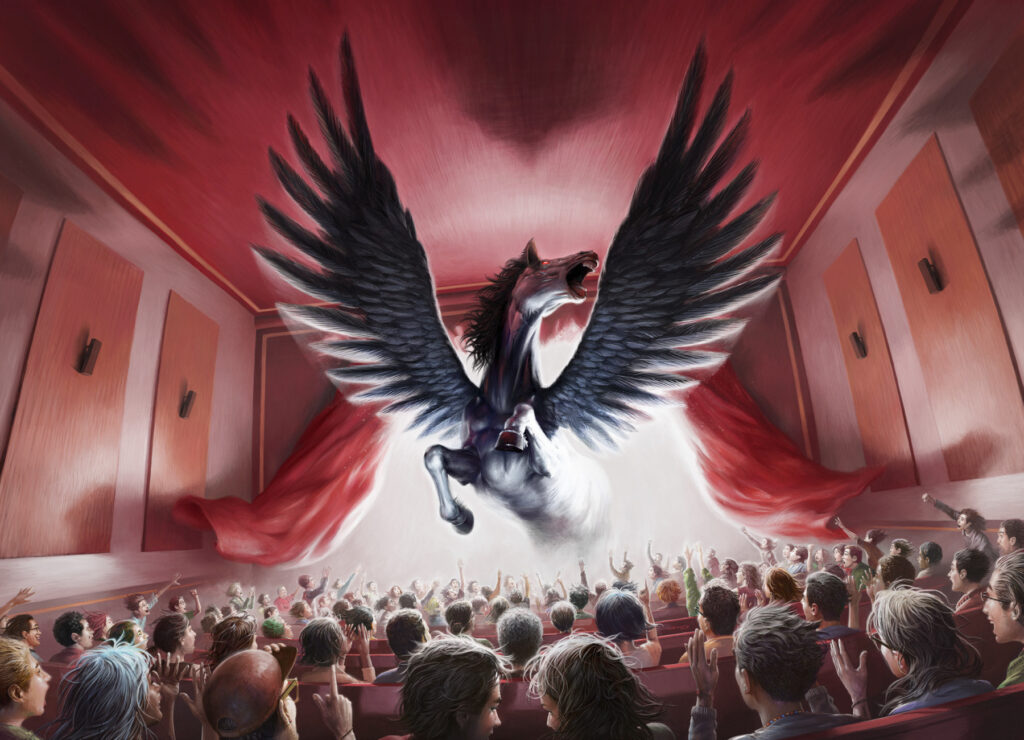 Immigration crises receive a (pardon the expression) arresting treatment in one of the very best of the bunch, Elisa Puerto Aubel’s THE ANTEROOM. Set in a future in which immigration has become computer-automated, it focuses on a refugee (Irene Anula) making life-or-death negotiations for herself and her baby with an unfeeling AI, and works powerfully as both allegory and a very specific situation. Another of the highlights was Tiffany Kimmel’s EVERYBODY GOES TO THE HOSPITAL, a stop-motion chronicle of a little girl whose illness leads to traumatic treatment by both a hospital and her own family. Inspired by her own mother’s experiences, Kimmel uses the vivid animation and equally expressive narration by Lucia Hadley Wheeler to elicit a heartbreaking sense of disquieting tragedy. Medical issues are also the subject of Emily Lerer’s PUNCH DRUNK, about a bartender (Danielle Argyros) trying to get through a shift while dealing with PTSD engendered by a recent gynecological surgery. Her workplace sparks some unpleasant memories as well in a film that sympathetically combines the personal and the visceral.

Folk horror and the supernatural were well-represented too. Adam Graf and Mandy Peterat’s STAINED SKIN is a beguiling part-animated effort juxtaposing a harsh working environment in the real world with a fantastical one under the sea. It engages as both a tribute to the power of storytelling and as an evocation of two very different yet thematically connected realms. Faride Schroeder’s DAUGHTERS OF WITCHES stars ROMA Oscar nominee Yalitza Aparicio as Clara, who returns to her native Mexico from the U.S. with her infant daughter, who is to take part in an ancestral forest ritual. Clara is unsettled about what will happen, and Schroeder builds a sense of mystery and dread as well as family tradition into the narrative. Also suffused with mood is Ríoghnach Ní Ghríoghair’s DON’T GO WHERE I CAN’T FIND YOU, in which a composer (Marie Ruane) grieving her recently deceased lover attempts to forge a communication with her through a new piece of music. Beautifully realized, it succeeds as a paranormal drama as well as a study of the healing properties of artistic creation.

They saved the very best for last with Sarah Gross’ KIN (pictured at top), which takes us back to the 19th-century American West, where two sisters living and raising their baby brother on a desolate prairie contend with a mysterious, threatening presence. Reminiscent in its atmosphere of Emma Tammi’s THE WIND, it’s thoroughly enrapturing and chilling, and leaves one wanting to see this story expanded to a feature of its own. 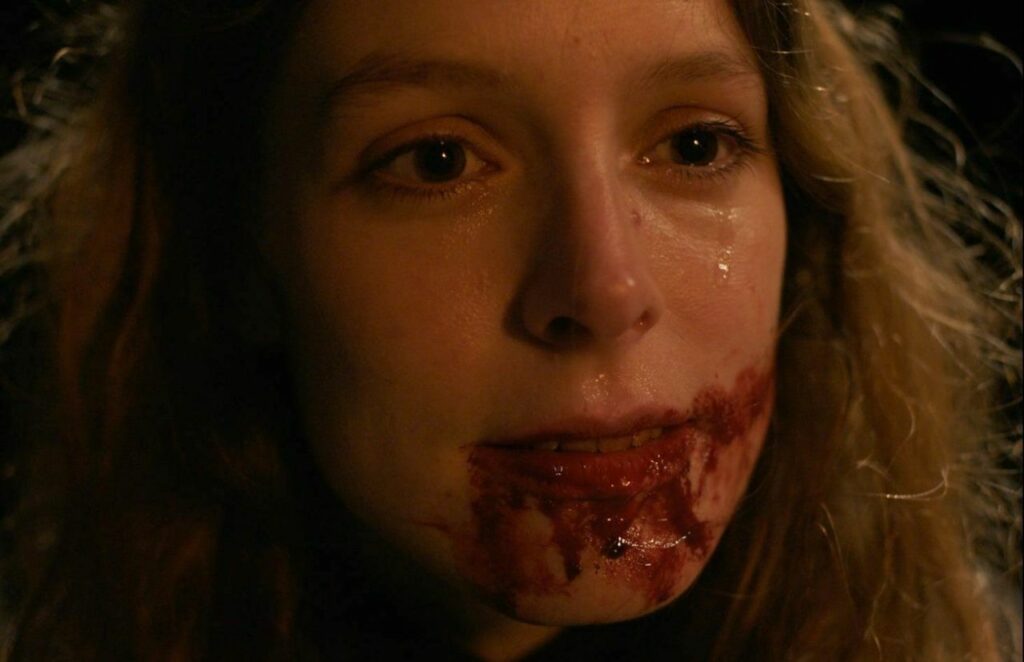 Small Gauge Trauma has always been devoted to the most extreme sides of cinema–graphically or emotionally–though 2022’s especially well-curated collection eased us in with a humorous opening pair. Sam Rudykoff’s CRUISE not only elicits a lot of dark chuckles, it actually succeeds in getting us to sympathize with a telemarketer, as we discover that the guy has to close a deal–or else. Even funnier is Eros V’s GOOD BOY, in which a young woman’s (Patricia Allison) dogsitting job turns into a hilarious nightmare. Clever editing and use of props make the most of the surefire premise of a cute little animal demonstrating an evil side.

Though it was very much at home in Small Gauge, Chelsea Lupkin’s thoroughly diverting SCOOTER could have fit equally well into Born of Woman, dealing as it does with Adrienne (Anita Abdinezhad), who’s abandoned by her jerk boyfriend after a party, rides the titular vehicle into a bloodbath, and ultimately achieves quite satisfying retribution and empowerment. Things got more somber with Sean Addo’s ROOTED, in which a musician (Nican Robinson) curious about his heritage sends out for a DNA test and receives with his results a tribal African mask that gives him horrifying visions of his family’s past. Though the narrative doesn’t quite stick the landing, Addo entertains compelling ideas here and expresses them with haunting visuals.

Stephen Kang’s BREATHE takes a time-honored basic premise–a young person chafing against family-imposed responsibilities–and gives it a genre spin by making its protagonist a 12-year-old girl (Gloria Zhang) with paranormal abilities who is pressed into service to help her father perform exorcisms. The mix is provocative, and Zhang’s sympathetic performance keeps you caught up in her heroine’s story. Another young female protagonist takes center stage in Frank Van den Bogaart’s DARKER, in which Rhena (Adriana Bakker) is told by her father about a creature in the woods that collects and preserves the stories of the dying. When her dad then disappears, she seeks out that being, and the result is an enthralling and immersive work of folk horror.

Then there are the preteen sisters (Anna Cooke and Asher Bryans) at the center of Michael Anthony Kratochvil’s I CALL UPON THEE, who play at occult practices until they have deadly serious consequences. Kratochvil is prepping a feature version, which he pitched at the festival’s Frontières market, and based on this bleak and chilling short, one hopes it finds its backing soon. Rod Blackhurst, director of the award-winning zombie drama HERE ALONE, was a welcome name to see at the helm of HYSTERIC, in which another pair of young sisters discover what’s behind their mother’s sudden turn toward insanity. Like HERE ALONE, it’s uncompromising in its vision and accomplished in its scary artistry.

Small Gauge ended on a less frightening but still engrossing note with its longest entry, Geordy Couturiau’s half-hour LUCIENNE IN A WORLD WITHOUT SOLITUDE (pictured above). Here again, the focus is sisterhood, albeit of a very different kind: The reason no one’s alone in this film is that everyone is accompanied at all times by an identical twin. This society-imposed companionship is challenged by Lucienne (Stéphane Caillard) when she becomes involved with a man who has no such double. Couturiau has here come up with a genuinely original concept and finds a compelling story to tell within this world–a fitting closer for a program celebrating fresh takes on all manner of genre subjects.