From Blade to Black Mirror to the break out success of Black Panther and A Wrinkle In Time with a young black female lead, we’ve recently seen the progression of black protagonists on screen in parallel or near future worlds but more often than not, the shimmering images of Blade Runner or the deep space infinity of the Star Wars franchise comes to mind when we think of dystopian futures or popular sci-fi. Each vision is glossy and high tech with some POC visibility, but Caribbean cultures aren’t top of mind when it comes to future societies. There is a whole area of Afrofuturist science fiction representing African and Caribbean cultures in a future vision from award-winning writers Octavia E. Butler and Tananarive Due; and one only needs to look at the work of Toronto’s own Nalo Hopkinson to see her worlds deeply rooted in Caribbean folklore and mysticism. Recently, her acclaimed 1998 book Brown Girl in the Ring was the inspiration for the film Brown Girl Begins, a prequel of sorts adapted for the screen by Canadian director and writer Sharon Lewis. She takes Hopkinson’s dystopian, post-apocalyptic story and creates a patchwork fable of a girl who finds her powers and the strength to fend off the embodiment of evil in her community. 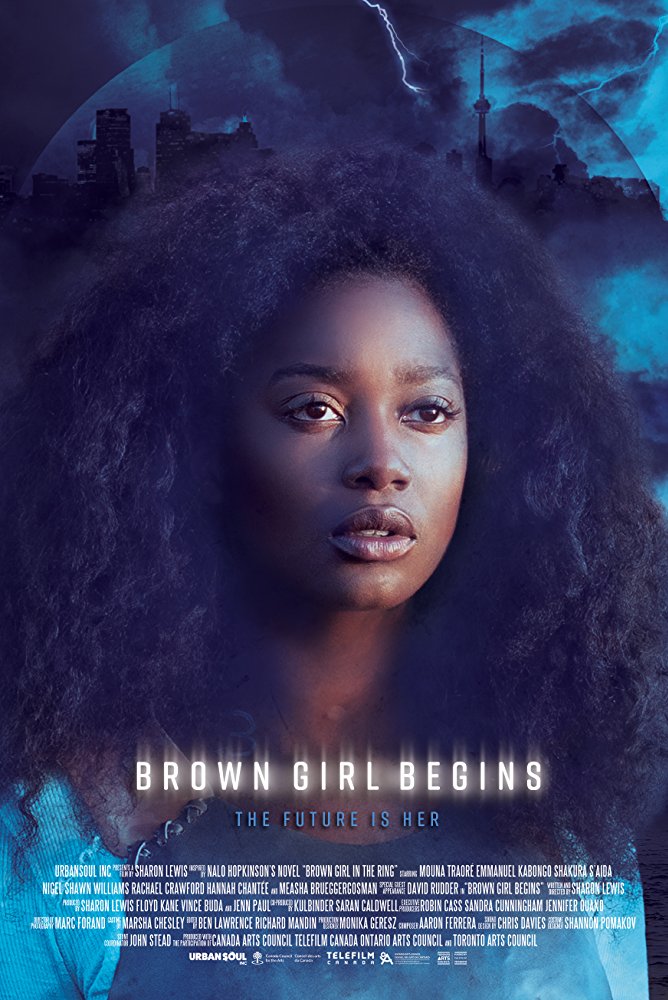 Ti-Jeanne (Mouna Traoré, of Murdock Mysteries, The Drop In) is a young black woman who lives in fear. Set in 2049 after class riots, the city of Toronto becomes a place where only the rich reside, banishing the rest of the population to fend for themselves on an island called “The Burn” just off the coast of the affluent mainland. Mysticism is a part of everyday life, and after seeing her mother perish from the efforts to become a powerful priestess ministered by the sinister Papa Legba (Nigel Shawn Williams), Ti-Jeanne lives with her grandmother Mami (Shakura S’Aida) learning the craft of magic in the hopes of her succeeding where her mother failed. When she meets the handsome Tony (Emmanuel Kabongo), she turns from her destiny to love. Living with Tony opens her eyes to the evils of the demon Crack (Rachel Crawford) and the drug that she uses to subdue the poor on the island under the drug lord Rudy. Ti-Jeanne must find her strength and purpose to overcome her fears of taking on a priestess role and champion her community.

With frenetic editing, Lewis brings mythical figures from Caribbean folklore – an oral tradition – to life. She took the ambitious task of translating not only Hopkinson’s characters for the screen, but a visual representation of this tradition through an Afrofuturistic lens and small budget, creating a non-linear narrative as Ti-Jeanne deals with her choices and trauma of losing her mother. Lewis succeeds not because she has created a glossy film with all the bells and whistles, but because it’s more of a grassroots performance piece, a sketch of a world that has lost its power, and the story of one young black woman who finds hers. And as a performance piece documented on film, Brown Girl Begins also captures the mutable nature of characters Papa Legba, Ti-Jeanne and Mami.

The cast did an upstanding job with Traoré, a seasoned television actor, and her mesmerizing eyes as Ti-Jeanne navigating her castoff community. S’Aida brought levity to many moments as Mami’s with her disapproving teeth-kissing and wisdom, and the multiple roles of Brukfoot Sam, Jab-Jab, and Papa Legba were played brilliantly by another television and film veteran, Nigel Shawn Williams. We also get the added bonus of Measha Brueggergosman, Toronto’s operatic darling on screen as an ethereal spirit that appears to Ti-Jeanne in times of doubt.

Like the dialect the characters speak in Brown Girl Begins, you might think the film speaks only to a specific audience and is a cultural signifier for those of Caribbean descent in Toronto, but this story is accessible to everyone for its lesson in courage and sacrifice. While it’s not a blockbuster with fancy effects, it’s important that films like this are supported to show that people of colour are a part of future worlds and sci-fi. Brown Girl Begins has been doing the festival rounds and if you want to keep tabs on the next screening and other events, follow @BrownGirlBegins on Twitter and head to the website, www.browngirlbegins.com.