Movie Review: “Attack of the Demons” Is An Amazing Animated Curiosity

Every now and then, a project will kick down the door to the theatre and subdue its audience with nothing more than its passion and charm. ATTACK OF THE DEMONS does exactly that. This unapologetically unpolished but infinitely exciting passion project is an animated love letter to horror that jams its genre joy right down your gullet. 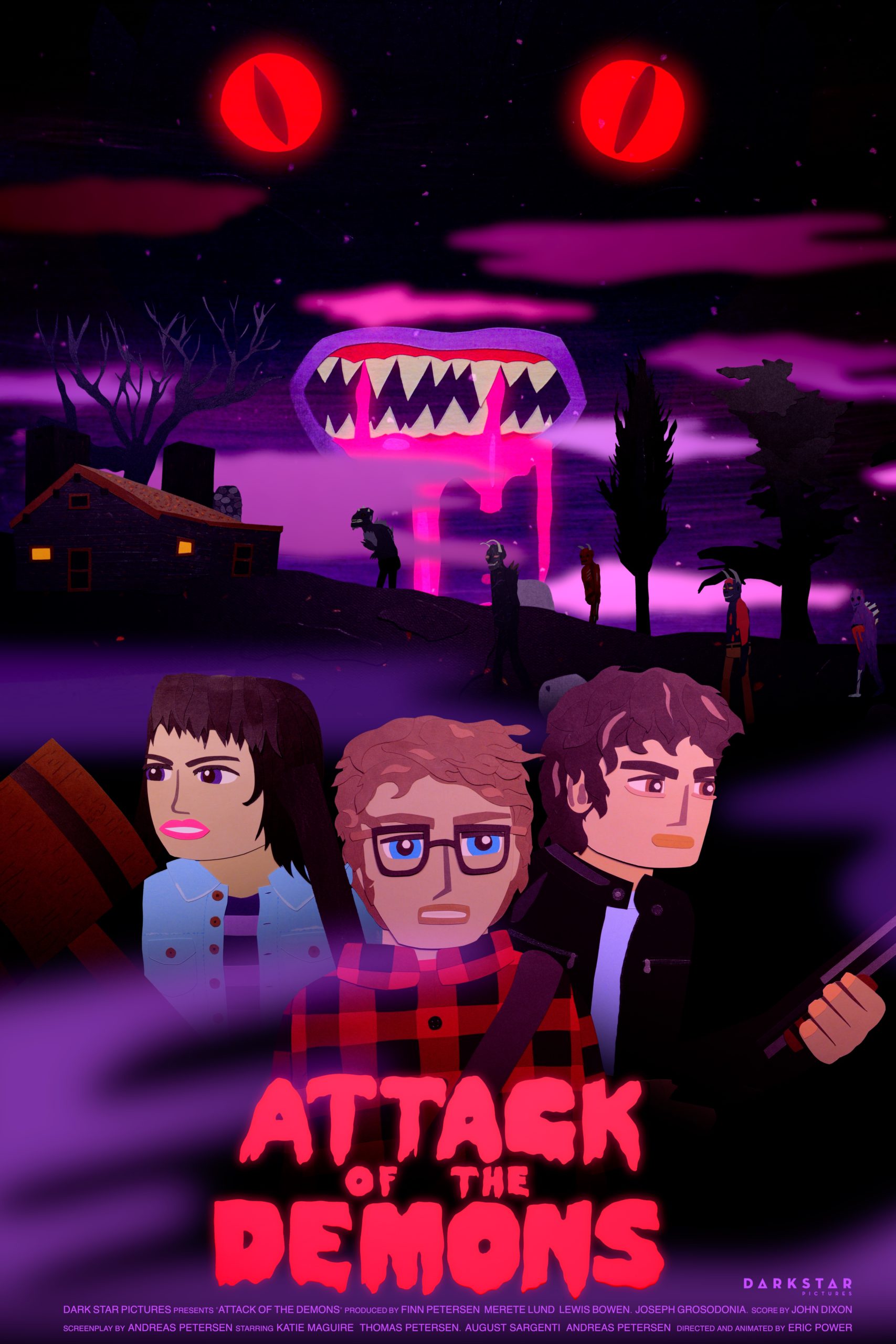 The film revolves around the town of Barrington, Colorado, which is hosting its annual film and music festival, which attracts throngs of artsy dickheads. The festival brings three former pals together once again, inspiring them to re-establish their high school friendship: Kevin (Thomas Peterson) is a local who loves old horror films, and is shocked to find that most moviegoers don’t share his passion (I think most readers on this site will empathize). Natalie (Katie Maguire) is visiting Barrington with her intolerable boyfriend, who is the ’90s equivalent of a hipster. Natalie’s taste ranges to the more niche, something her boyfriend incessantly derides her for. Finally, there’s Jeff (scriptwriter Andreas Petersen), who is there to “visit” his odd uncle, while really spending the entirety of his time at the local arcade, a painful reminder that arcades used to be fucking rad.

Obviously, these three couldn’t be free to just enjoy their various fandoms, so a random cultist pops up and turns the whole festival into a gory demon summoning. The three join forces to get the hell out of town, which becomes complicated when all of the roads are buried under falling rocks (that’s Colorado, baby). Along the way, they learn that a giant demon king sleeps under the town, and the demons are turning the townsfolk into a malleable goo to help reform his body.

This level of gore, of people being reduced down to their effluence and reformed into monstrous shapes, would usually be impossible in a live-action format, so luckily for audiences the whole body melting bonanza is delivered in Eric Power’s trademark “cut-out” animation style. This style has garnered a lot of comparisons to the similar visual style of South Park, but the slight similarity ends there. There’s a handcrafted charm to this animation, with love in each frame that sets it apart from films that have been shipped off to animators overseas to better meet a deadline. People’s fingernails and teeth get pushed out to make way for their new evil forms, a transition any fan of Lamberto Bava’s Demons will find familiar. Without an intense dedication to the style and care for the craft, those horror references might have been harder to recognize.

The soundtrack by John Dixon, fittingly, is also pretty cool. It’s hard to produce a film about a music festival and dress it with a lackluster soundtrack. Many scenes are underscored by the earthy, minimalist twang of acoustic and electric guitars, reminiscent of the scene-setting ambience of The Last of Us. It’s woodsy, hopeful yet ominous, and gives the setting a very tangible feel, especially for a cartoon. While everyone is aping the synthwave of Stranger Things’ opening theme, it’s refreshing to see a retro-inspired film not go for the obvious.

There’s a small subplot, or even a sub-theme, that chastises gatekeeping assholes. This is overt in the representation of Natalie’s boyfriend who believes himself to be the last word in music preference. It becomes more subtle when the three main characters begin to argue whether film, music, or video games, is the superior form of media. While they never concede to their friends, the audience is left with the wider impression that art isn’t competitive, and is to be enjoyed, not guarded.

The film’s biggest flaw might also be what pushed into the “endlessly charming” category: the voice acting. Many of the actors seem to be pulling double duty, being writers, directors, or just friends of the crew. These are not professionals, and you can definitely hear it, with each line being delivered like it’s a late Monday afternoon table-read. But this doesn’t exactly kill the film, since it’s clear that instead of blowing the budget on professional voice actors, they put every penny into the animation, music, and writing. ATTACK OF THE DEMONS is the product of a bunch of passionate people desperate to get their project out to audiences by any means necessary, even if it means reading the lines themselves. If you love cartoons, old horror, good music, or a garish combination of all three, you definitely need to check out ATTACK OF THE DEMONS.

ATTACK OF THE DEMONS is available now on DVD and Digital from Dark Star Pictures.