Movie Review: “MANEATER” Fails to Reel In a Compelling Story

Sharks are notoriously fickle performers. The massive killer fish may send shivers down the spines of the most hardened horror fans, but it is nearly impossible to control their behavior in a way that works onscreen. Even fake sharks can be hard to work with. Production on Steven Spielberg’s Jaws was notoriously stalled by technical difficulties and a massive faux shark nicknamed Bruce who rarely worked when it came time to roll the camera. With the advent of CGI, many shark films began creating digital images of sharks to get around the problem of filming an uncontrollable predator. But this ushered in a different set of problems, namely implausible creature effects that often leave us longing for Bruce and his plastic friends. Most modern aquatic horror films compensate for a lack of believable shark action with a fun gimmick, stunt casting, or well-written characters who make us care about their lives even when we can tell the sharks that threaten them aren’t real. Justin Lee’s MANEATER has none of these things. The story of a would-be bride and her friends targeted by a man-eating shark lacks believable sharks and believable humans. Despite a few shocking kills, there’s little in this fish film to make anyone scared to go back into the water.

Jessie (Nicky Whelan) is supposed to be on her honeymoon, but after a vague betrayal, she heads to her romantic beachside getaway sans husband to lick her wounds with a group of stereotypical friends. They rent a charter boat and sail off to a secluded island with shores that prohibit other boats from docking. But a man-eating shark has also taken up residence in the waters surrounding the gorgeous island and targets the group, picking off Jessie’s friends one by one. On the hunt for the shark is Harlan (Trace Adkins), a local whose daughter has just been eaten by a vicious man-eater days earlier. As a result, he’s pissed off and ready to kick some shark ass. After interrupting the college lecture of Professor Hoffman (Jeff Fahey), a shark expert he seems to know from a vague past, he sets off on a mission to hunt down the shark who killed his child. Sure enough, he stumbles on Jessie’s doomed charter group just in time to save the day and gain himself a surrogate daughter. 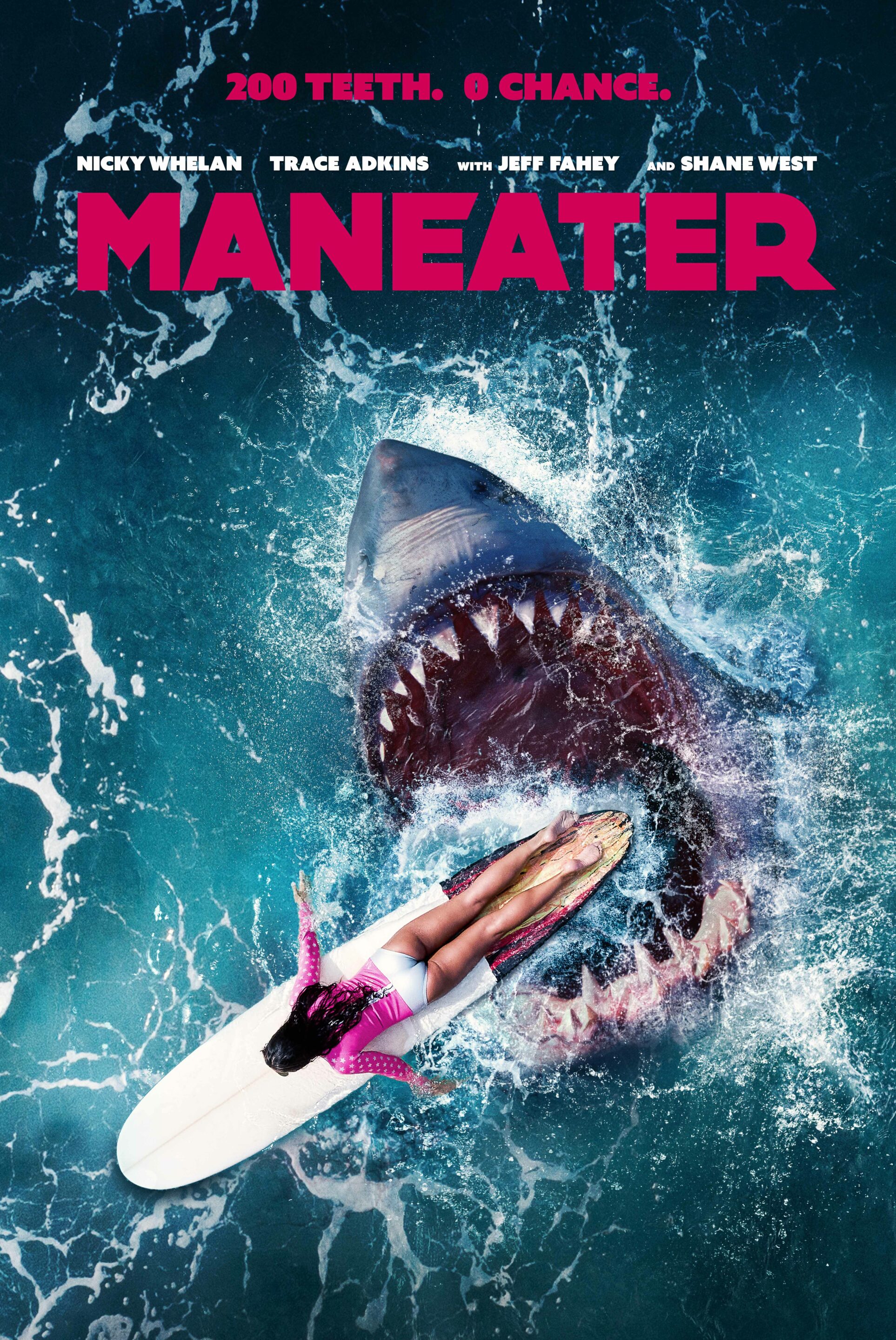 Adkins is insufferably stilted in a role that seems designed to make him look as cool as possible, but it’s difficult to see anyone other than fans of his music actually looking to him as a hero. The country singer is going for Clint Eastwood-esque grizzled badass, but his monotonous delivery of nearly every line just translates to blandness. Despite his long “island” hair, he seems painfully out of place in the story and it’s difficult not to wonder how much better MANEATER would be if we could just focus on Jessie and her friends. Jeff Fahey also shows up as a shark expert to elevate the cast for a bit but doesn’t stick around long enough to make much of a dent. Harlan barges into Professor Hoffman’s classroom and overrides years of study and fact-based expertise with his own highly specific anecdotal evidence. But who needs a lesson plan when you’re a man with a grudge? Sorry, students.

The film’s saving grace is Shane West as Will, doing his best amidst a cast he can act rings around. Part goofball, part leading man, he’s Jessie’s friend and should be the romantic lead, but the ridiculous plot seems determined to pair her with unavailable authority figures. Despite his best efforts, West feels out of place in the film and his presence, though delightful, distracts from the action. It’s tempting to abandon the screen and follow the IMDb trail of his career to figure out how he wound up in this thing in the first place. The rest of the cast is simply ridiculous, shifting between singles desperately trying to get their fifteen minutes of character development supported by hokey background music that cheapens every scene.

MANEATER’s special effects are surprisingly interesting though the shark never feels even remotely real. Red pigmentation clouds the water whenever the fish attacks and the massive fin that keeps emerging from the water is comically out of proportion with the CGI shark we do see. However, the aquatic death sequences are brutal and Lee makes up for the obviously fake action by leaning hard on creativity. A scene in which characters are picked off of a dock by the calculating shark is horrific and an early moment in which an ill-fated swimmer does a gainer off a cliff straight into the open jaws of the shark is shockingly fun. Lee also benefits from an abundance of characters to be eaten and very few of them emerge from the water with their lives. Unfortunately, Adkins seems contractually obligated to save the day and the the climactic showdown between man and shark is beyond stupid. While we’ve seen firearms successfully used to conquer an aquatic threat before, but the way this poor fish is gunned down feels specifically geared towards NRA members and gun fetishists.

Some audiences, mainly those who don’t spend much time watching horror, will love MANEATER. The story is more or less coherent and concludes with a clumsy tearjerker ending akin to films found on the Hallmark Channel. The story seems tailor made for fans of Trace Adkins and CMA attendees will also likely enjoy it. But anyone searching for an in-depth story about  the victims of a man eating shark would be better served looking elsewhere. Other than an occasionally beautiful shot of the ocean marred by cheesy music and two veteran actors clearly slumming it, there’s little to hold the audience’s attention. Those looking for a compelling shark attack story would have better luck combing through reruns of Shark Week.

Jenn Adams
Jenn Adams is a writer and podcaster from Nashville, TN. She co-hosts both Psychoanalysis: A Horror Therapy Podcast and The Loser’s Club: A Stephen King Podcast. In addition to Rue Morgue, her writing has been published at Ghouls Magazine, Consequence of Sound, and Certified Forgotten. She is the author of the Strong Female Antagonist blog and will gladly talk your ear off about final girls, feminism, and Stephen King. @jennferatu