Movie Review: The suspense bleeds out of “HALLOWEEN KILLS”

Although the two are otherwise most dissimilar, the makers of both 1981’s original HALLOWEEN II and the new HALLOWEEN KILLS were faced with the same dilemma when conceiving their picking-up-right-where-the-previous-movie-left-off sequels. Resilient heroine Laurie Strode (Jamie Lee Curtis in both) was nonetheless left in pretty messed-up condition by her first encounter with Michael Myers, so the only plausible place for her to go was Haddonfield Memorial Hospital, which would seem to limit her involvement in the ensuing action. HALLOWEEN II’s creators found ways to keep the focus more or less on Laurie throughout their film; in HALLOWEEN KILLS, she’s sidelined for the bulk of the runtime.

That’s problematic, and so is quite a bit of the material the KILLS team devote their scenario to instead. Which is a shame, because it proceeds from a promising idea, and the opening act does a good job of laying the groundwork. It includes a lengthy flashback to the first night he came home, revealing that Officer Hawkins (Will Patton), left bloodied but alive at the end of director David Gordon Green’s previous HALLOWEEN, has a history with The Shape. This segment, with Thomas Mann as the young Hawkins, is stylistically consistent with John Carpenter’s original while providing the foundation for a deeper exploration of how Michael’s initial rampage left psychological as well as physical scars on the population of Haddonfield, IL. 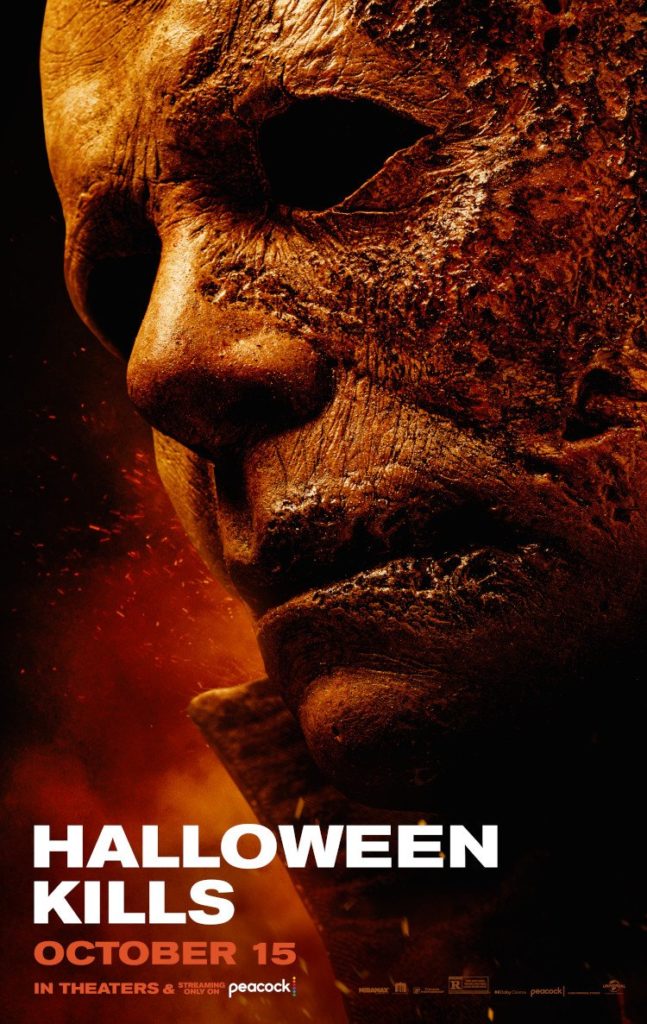 Next stop is the present day (i.e. 2018) and a nightclub where a number of ’78 survivors have gathered: Dr. Loomis’ nurse Marion Chambers and former babysittee Lindsey Wallace, played by returning actresses Nancy Stephens and Kyle Richards, grown-up bully–revealed to also be a victim of bullying–Lonnie Elam (Robert Longstreet) and Tommy Doyle (Anthony Michael Hall), who takes the stage to deliver a soliloquy about the murders that still haunt his town. Everyone in the place is still blissfully ignorant that Michael is on the rampage again, having survived the conflagration at the prior movie’s end, though that doesn’t last long.

Up to the point when the group discovers that hometown boy is back and doing what he does best, HALLOWEEN KILLS offers an intriguing take on the slasher sequel. The script by Scott Teems, Danny McBride and Green examines the aftereffects of terror on those who experienced it, living in a town whose younger generation is clueless about it. (As opposed to the Myers house’s ongoing haunted rep in Carpenter’s movie, in this one it’s visited by a trio of little jerks with no clue about its history.) And as opposed to Michael stalking his way through the shadows of a town unaware of his presence, this time Tommy rallies the local troops to hunt his past terrorizer down. Of course, even as they begin by heading out in groups, they sometimes can’t help splitting up or doing other dumb things that put them in harm’s way.

A greater issue is that all the jumping between the assorted characters on the Michael hunt, also including Laurie’s granddaughter Allyson (Andi Matichak) and her boyfriend/Lonnie’s son Cameron (Dylan Arnold), plus the new residents of the Myers abode, gay couple Big John (Scott MacArthur) and Little John (Michael McDonald), saps the tension out of HALLOWEEN KILLS. In setting up the franchise’s record-high body count that’s become a major point of discussion (because the point of a HALLOWEEN movie is…the body count?), the director and his co-writers have burdened themselves with an unmanageably large ensemble. And that’s not even counting all the folks hanging around Haddonfield Memorial, where Laurie languishes with daughter Karen (Judy Greer) by her side. The strain to give Laurie enough to do to justify Curtis’ top billing shows; the actress does have a couple of nice moments with Patton when Hawkins ends up sharing the room with her, but considering his prominence in that early flashback, the movie gives Hawkins short shrift as well. Meanwhile, Karen doesn’t want Allyson to head out with the rest of the Michael mob, preferring she stay safe by Laurie’s side…though Karen also believes Michael will be heading straight for the hospital, so that doesn’t make a lot of sense.

All those concerned citizens after Michael’s blood are clearly intended as an allegory for the recent political climate, as they let their terror and suspicion turn them into animals (though the movie was lensed before the events of January 6). There’s some fairly ponderous speechifying about the nature of fear, and this metaphorical strand climaxes with a major setpiece motivated by a thoroughly implausible case of mistaken identity. And even as the movie makes a credible stab for a while at studying the impact of trauma and horror on individual and collective psyches, that would land stronger if the film itself wasn’t so bloodthirsty and sadistic. The lingering over the victims’ moaning, gurgling death throes crosses the line from scary to merely unpleasant; the most frightening scene is a bloodless one in which Michael stalks Lindsey through dark woods.

There’s one more impediment to HALLOWEEN KILLS’ suspense (possible SPOILER ALERT): The long-ago announcement that it will be followed by HALLOWEEN ENDS, which goes into production soon for release next October. With another follow-up on the way, it’s kinda clear that both Laurie and Michael are guaranteed to survive this one, and that their conflict–the crux of this whole revival–will go unresolved till next time. Here’s hoping that Laurie will be given a larger role in ENDS, and that her grappling with Michael will take precedence over giving him a larger roll call of human targets.